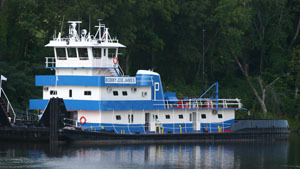 When Tim Parker first stepped onto the deck of a barge on the Black Warrior River in 1933, he didn't know where the river would take him. It was the heart of the Great Depression. Jobs were scarce, and for a young man, work as a deckhand earning a dollar a day was a welcome opportunity.

It wasn't long before Tim revealed a talent for the river life. Just three years after joining Valley Barge Lines, Tim had his pilot's license. He was now guiding the boat instead of riding on the boat.

During this time, Tim was saving his money. After all, he ate and slept on the boat, and during the Depression there wasn't much to buy. By 1940, Tim had both money and a dream. With the help of a friend, he purchased the Heloise, which was an old sternwheel steamboat. He was Captain Tim Parker now, and his new business of Parker Towing Company had its first contract.

It's obvious that Tim Parker, Sr. found more than just a job, but a way of life that would offer him the opportunity to raise a family and build a business with what must have become a sense of destiny. There never seemed any doubt that PTC would be a family business.

In 1942, Captain Tim married a young school teacher working in Scottsboro, AL named Thelma Ford. Thelma quickly became part of the fledgling business, keeping the books on their dining room table while her husband rode the river. Captain Tim and Thelma had two children, Tim, Jr. and Alice. As young children they would drive with their mother to meet their father carrying supplies for the boat and its captain.

By 1946, the company was expanding. Captain Tim purchased a new boat which was a new diesel powered propeller craft and moved the company into new offices in Tuscaloosa, Alabama, where our offices remain today.

The size of the company has changed over the years but not the dedication to the management principle that hard work, knowledge of the waterways, knowing the needs of your customers are the true keys to success.

Today, Parker Towing has grown into one of the largest barge lines in the Southeast, launching the region's most powerful fleet of towboats. These towboats range from 1,000 to 4,200 horsepower.