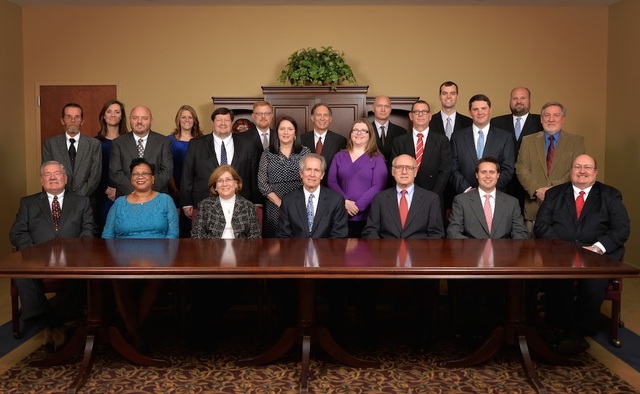 Tim Parker joined Parker Towing Company in 1974 and now serves as Chairman of the Board. Prior experience includes 2 years in the United States Army and 5 years with the Lykes Brothers Steamship Company. He has been involved with numerous professional organizations having served as president of the Alabama Chapter of the American Society of Transportation and Logistics, the West Alabama Traffic and Transportation Club, and the Tennessee-Tombigbee Waterway Development Council. Tim is currently serving on the Board of Directors for Mercedes-Benz U.S. International, Inc. He is a past member of the United States Army Corps of Engineers Inland Waterways User Board; a past Chairman of the Board of the Alabama State Port Authority; and a past member of the Board of Directors for AmSouth Bank of Tuscaloosa. He has also been involved with numerous civic organizations. Tim and his wife, Cathy, are current members of the United Way of West Alabama’s Alexis De Tocqueville Society and were chosen as the 2014 Family of the Year. He has served as past board president and campaign chairman at United Way and on boards in the community including the YMCA of Tuscaloosa, Tuscaloosa County Industrial Development Authority and many more. Tim is a graduate of the University of Alabama and the Harvard Business School Owner-President Management Program. He served three terms, (12) years as a member of the Alabama State Legislature.

Mr. Haun joined Parker Towing in January 1975 and served as Personnel Manager, Operations Manager, Vice President Operations, Executive Vice President, and President, before his present position of Vice Chairman and CEO. In addition, he is the Chairman of the Warrior Tombigbee Waterway Association and the former chairman of the Southern Region of the American Waterways Operators. Mr. Haun serves on the Inland Waterways Users Board and on the Board of Directors the Tennessee-Tombigbee Waterway Development Council. He formally served on the Board of Directors of the American Waterways Operators. Mr. Haun graduated from the University of Alabama with a Bachelor of Science in Chemistry and earned his Juris Doctor from the University of Alabama, School of Law. In addition, he graduated from the Key Management Programs at both Stanford University and the University of Virginia, Darden School of Business. Mr. Haun is married to the former Alice Parker of Tuscaloosa. They are parents of Charles Haun III and Alison Haun Phillips.

Tim Parker III joined Parker Towing Company in 2005 and served as a Sales Representative and Director of Sales and Terminal Services before his present position as President.  He also serves on Parker Towing Company’s Board of Directors.  Mr. Parker is actively involved in a number of different industry organizations including the Tennessee – Tombigbee Waterway Association, Waterways Council and serves on the board of directors for the Warrior – Tombigbee Waterway Association.  Tim was most recently appointed to serve a 5 year term on the Alabama State Port Authority Board of Directors. Mr. Parker worked in the trucking industry for US Xpress Inc. in Chattanooga, TN from 2003 to 2005.  During his tenure he served in numerous sales and customer service roles in the expedited and team divisions.

Mr. Parker graduated from the University of Tennessee at Chattanooga where he received his Bachelor of Science degree in Business Marketing.  He also recently completed the Management Development Program at the Darden Business School at the University of Virginia.

He is involved with numerous civic and business organizations including:  current executive committee member and past Chairman of the Board of Directors for the Tuscaloosa Metropolitan YMCA.  He is currently the Vice Chairman of the Administrative Board for the First United Methodist Church, as well as serving on the church’s Finance committee. He is also a past board member of the West Alabama Chamber of Commerce.  Mr. Parker is a 2007 graduate of Leadership Tuscaloosa and the Alabama Leadership Initiative.

Chas Haun joined Parker Towing Company, Inc. in December 2004.  He currently serves as the Executive Vice President where he is responsible for the operation of Parker Towing’s fleet of towboats and barges.  He also serves as the Project Manager for new boat and barge construction projects.  Additionally Chas is President of Mobile Shipbuilding and Repair, and Whistler Machine Works Inc., two wholly owned subsidiaries of Parker Towing. Chas is the member representative and serves on the Board of Directors for one of Parker Towing’s main trade organizations, the American Waterways Operators. Chas graduated from the University of Alabama with a Bachelor of Science degree in Commerce and Business Administration.  Before graduating he worked aboard Parker vessels and in Parker’s Port operations.  After graduating, Chas worked in Construction Administration for a large industrial construction company based in Birmingham, Alabama.  He is also a graduate of Leadership Tuscaloosa and the High Potential Leadership Program at the Harvard Business School.

Mr. Huckabee joined Parker Towing Company in 1977 and has served in all positions on various Parker Vessels attaining the rank of Captain in 1983. He served in that capacity until 1990 when he became Port Manager at the Port of Naheola and then Manager of Port Operations in 1994. He became Vice President Terminal Services in 1996 and Vice President Operations & Port Captain on January 1, 2009. He was promoted to his current position of Senior Vice President of Corporate Development in July of 2018.

Mr. Huckabee currently serves on the Inland Waterways and Intermodal Infrastructure Advisory Board to the Director of the Alabama Department of Economic and Community Affairs (ADECA) and on the Board of Directors of the Tennessee Tombigbee Waterway Association. He is a member of the Inland Rivers Ports and Terminals Association ("IRPT") having served on the board of directors and as its Southeast Rivers Basin Chairman. He is also a member of the National Waterways Conference having served on the Board of Directors, Executive Committee and as its Budget Chairman and is an active member of the Warrior Tombigbee Waterway Association. Mr. Huckabee is currently licensed by the U.S. Coast Guard as a Master of Towing Vessels upon Great Lakes, Inland Waters and Western Rivers.

Mr. Rabbit joined Parker Towing in 1997, and serves as the Vice President of Finance. His past experience includes serving as the Vice President of Finance and Chief Financial Officer at Shelby Die Casting Company for three years, three years as Division Controller for Danskin, Inc. and ten years of accounting experience at BDO Seidman and Ernst & Young. Mr. Rabbit earned both his Bachelor of Science in Accounting and Master of Professional Accountancy degrees from Louisiana Tech University. Mr. Rabbit is a member of Rotary International and serves on various local civic organization boards and/or committees.

Chris Bushhorn has been with Parker Towing Company since 2010 and currently serves as the Vice President of Administrative Services and the Company Security Officer. He has previously served as Director of Administrative Services and Safety, Training and U.S. Coast Guard Compliance Manager. He graduated from California State University, Chico in 1991 and has received several certifications such as the Company Compliance Internal Auditor, Company Security Officer, Navy Senior Officer Leadership Course, Chamber of Commerce West Alabama, Leadership Tuscaloosa program and currently serves as a Managing Board Member of the USCG, Sector Mobile / Northeast Gulf of Mexico Area Maritime Security Committee.

Chris Bushhorn is currently a Commander in the US Navy Reserves. He is a fully qualified Navy Expeditionary Supply Corps Officer and a veteran of Operation Iraqi Freedom.